Update Required To play the media you will need to either update your browser to a recent version or update your Flash plugin.

Website: http://www.facebook.com/pages/Buddhism/253631344296?ref=tsChanting "Amitabha" out loud would calm and purify our minds.AmitābhaSanskrit: अमिताभHindi pronunciation: AmitābhoChinese: 阿彌陀佛Vietnamese:A-di-đà PhậtJapanese: 阿弥陀如来Tibetan: འོད་དཔག་མེད།Mongolian: Одбагмэд, Аминдаваa, АюушThai: พระอมิตาภพุทธะKorean: 아미타불is a celestial buddha described in the scriptures of the Mahāyāna school of Buddhism. Amitābha is the principal buddha in the Pure Land sect, a branch of Buddhism practiced mainly in East Asia, while in Vajrayana Amitābha is known for his longevity attribute and the aggregate of distinguishing (recognition) and the deep awareness of individualities. According to these scriptures, Amitābha possesses infinite merits resulting from good deeds over countless past lives as a bodhisattva named Dharmakāra. "Amitābha" is translatable as "Infinite Light," hence Amitābha is often called "The Buddha of Infinite Light."According to the Larger Sūtra of Immeasurable Life (Mahāyāna Amitāyus Sūtra) Amitābha was, in very ancient times and possibly in another system of worlds, a monk named Dharmakāra. In some versions of the sūtra, Dharmakāra is described as a former king who, having come into contact with the Buddhist teachings through the buddha Lokesvararaja, renounced his throne. He then resolved to become a buddha and so to come into possession of a buddhakṣetra ("buddha-field", a realm existing in the primordial universe outside of ordinary space time, produced by a buddha's merit) possessed of many perfections. These resolutions were expressed in his forty-eight vows, which set out the type of buddha-field Dharmakāra aspired to create, the conditions under which beings might be born into that world, and what kind of beings they would be when reborn there.In the versions of the sutra widely known in China, Vietnam, Korea and Japan, Dharmakāra's eighteenth vow was that any being in any universe desiring to be born into Amitābha's Pure Land and calling upon his name even as few as ten times will be guaranteed rebirth there. His nineteenth vow promises that he, together with his bodhisattvas and other blessed Buddhists, will appear before those who call upon him at the moment of death. This openness and acceptance of all kinds of people has made the Pure Land belief one of the major influences in Mahāyāna Buddhism. Pure Land Buddhism seems to have first become popular in northwest India/Pakistan and Afghanistan, from where it spread to Central Asia and ChinaThe sutra goes on to explain that Amitābha, after accumulating great merit over countless lives, finally achieved buddhahood and is still alive in his land of Sukhāvatī, whose many virtues and joys are described.Through his efforts, Amitābha created the "Pure Land" (净土, Chinese: jìngtŭ; Japanese: jōdo; Vietnamese: tịnh độ) called Sukhāvatī (Sanskrit: "possessing happiness") . Sukhāvatī is situated in the uttermost west, beyond the bounds of our own world. By the power of his vows, Amitābha has made it possible for all who call upon him to be reborn into this land, there to undergo instruction by him in the dharma and ultimately become bodhisattvas and buddhas in their turn (the ultimate goal of Mahāyāna Buddhism). From there, these same bodhisattvas and buddhas return to our world to help yet more people.Amitabha is the Buddha of the comprehensive love. He lives in the rest (represented as a meditating Buddha) and works for the enlightenment of all beings (represented as a blessing Buddha). His most important enlightenment technique is the visualization of the surrounding world as a paradise. Who sees his world as a paradise, awakens his enlightenment energy. The world can be seen as a paradise by a corresponding positive thought (enlightenment thought) or by sending light to all beings (wish all beings to be happy). After the Amitabha doctrine, man can come to paradise (in the pure land of Amitabha), if he visualizes at his death Amitabha in the heaven (sun) over his head (western horizon), thinks his name as a mantra and leaves the body as a soul through the crown chakra. 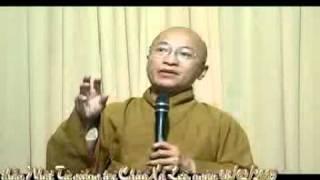 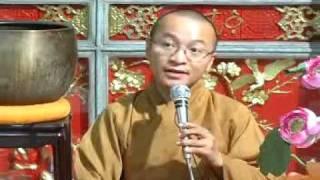 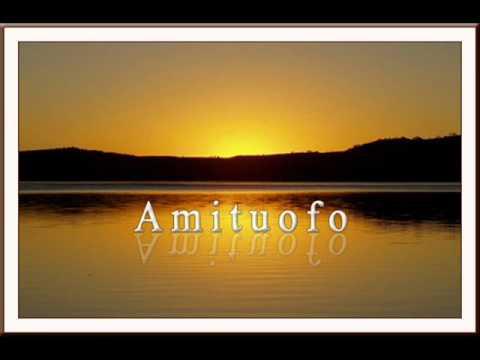 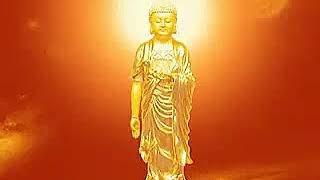 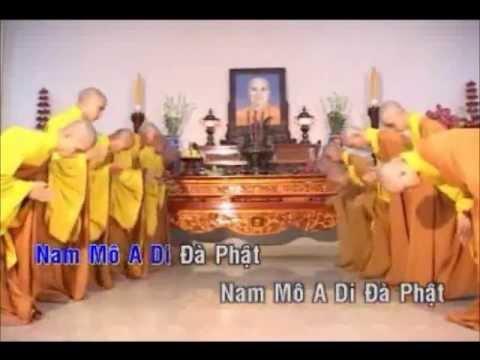